At an August 23rd press conference, MBTA mechanics and allies, including Congressman Michael Capuano, gathered at the Arborway Garage in Jamaica Plain to speak out against Governor Baker’s continued attempts to privatize MBTA services.

Addressing the crowd, MBTA mechanic and Machinist Union member, Ilir Quorri stated, “This noise that we’re making and the message we are trying to send the public is that it’s not about us. It’s not about 100 jobs or 200 jobs. It’s more about the million people that take the T every day.”

Similarly, James Conigliaro GVP of the Machinists Union of the Eastern Territory told reporters that public transit, “Shouldn’t be about profits,” going on to state, “Don’t be fooled. This is nothing more than corporate greed trying to lower wages for working families in Massachusetts and we need everybody to stand up.” 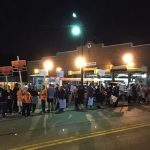 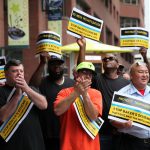