Boston Mayor Marty Walsh, made an unscheduled appearance at a rally comprised of MBTA mechanics and their families outside of a recent MBTA board meeting. The rally was held in response to a recent privatization scheme pushed by Massachusetts Governor Charlie Baker and his former MBTA G.M. turned board member, Brian Shortsleeve, that seeks to privatize core MBTA services including bus maintenance, despite the Governor’s prior pledge not to outsource core services.

During his unscheduled appearance, Mayor Walsh joined the crowd to offer an inspiring speech of support for the workers and to voice his opposition to the privatization of their jobs. “I stand firmly on your side when it comes to this issue because I know what privatization means and I know what privatization does. Privatization does not save money. Privatization allows long term costs to go up and causes problems with the company,” said Walsh into a bullhorn on the street outside the Transportation Building while the MBTA Fiscal Management and Control Board convened in a conference room directly above. “We can just look around at commuter rail companies and see what happened there. We can look at these other utilities that we have. What’s happened when you privatize? Costs go up. Workers benefits go down. Wages go down. The middle class goes down.”

Addressing the MBTA board inside the Transportation Building about the millions in savings that the mechanics have offered to agree to, Mike Vartabedian, a union representative, and former MBTA mechanic stated, “Brian Shortsleeve continues to undervalue our proposals so he can move ahead with his ultimate plan which is to privatize the MBTA.”  He went on to state “If this administration really cared about the workers and their families, Brian Shortsleeve would have accepted the $29 million in savings that we have offered or would have at least put a counter proposal on the table. I’m asking the fiscal management and control board to take over these negotiations.”

Other testimonies included that of Marine Corps veteran and MBTA mechanic Nate DuBois who addressed Brian Shortsleeve, also a former marine, directly, saying the attack on his job “hurts.” Dana A. Morrison, age 50, who suffered a traumatic brain injury while serving in Iraq with the Massachusetts National Guard, also stood with DuBois and Vartabedian at the podium, stating “My coworkers have created an environment that has made the transition from war zone, to hospital, to home that much easier… These union members’ hearts match their hard work I see every day and I urge you to please do everything within your power to allow them to keep doing that work to the benefit of the Commonwealth.” 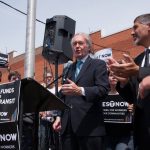 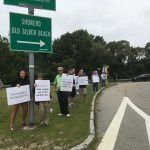 Visibility Action at the Cape RotariesNews