In response to the August 11th argument, “Should the MBTA privatize its Quincy, Arborway, and Lynn bus maintenance garages?” in which Marine Corps veteran, and MBTA mechanic at the Arborway garage, Nate Dubois, argued against privatization, 98 percent of readers sided with Dubois against privatization of MBTA garages.

Similarly, following the September 8th argument, “Should the MBTA proceed with plans to privatize its Arborway, Lynn, and Quincy garages?” in which Everett resident and MBTA fueler from the Lynn bus maintenance garage, Alex Grande, argued against privatization, over 68% of readers voted against privatization. 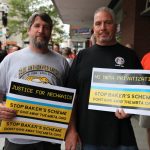