In October, MBTA officials quietly waived over $800,000 in fines accrued by Keolis for unprecedented poor service during the winter storms of 2015.[1] During that January, Keolis-controlled commuter lines experienced the first derailment in the entire state in years. Track failures along 30 miles of the Haverhill line caused three cars to ran off the tracks. Disruptions in service included 10 cancelled trains during the morning commute.[2]

Baker insists that these lapses in service occurred because of factors beyond Keolis’ control.[3] However before and since the storms Keolis has struggled to maintain reliable service that operates close to schedule.[4] In the 2015 and 2016 fiscal years alone, Keolis has incurred $12.8M in fines for maintenance and scheduling issues.[5] The percent of commuter trains operating on time during the winter months has never dipped lower than in 2015. From 2011 to 2014 when the MBTA last operated the commuter lines, the percent of on-time trains never decreased by more than 20% of all trains. During Keolis’ first winter operating the trains, the percentage of on-time trains plummeted by more than 50%.[6] 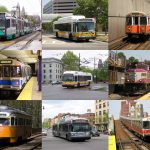