At a State House hearing on Monday, legislators introduced a bill that would reign in privatization across the state. The bill, which already has the support of two-dozen co-sponsors, would reinstate the Taxpayer’s Protection Act, known as the Pacheco Law,  which was suspended in 2015 following severe winter weather that brought MBTA’s train service to a halt on more than one occasion.

The law stipulated that before any state service could be outsourced to a private contractor, they had to demonstrate cost savings as well as guarantee no reduction in service. Following the 2015 suspension of the law, the MBTA has contracted out a variety of operations to private vendors and is currently considering outsourcing bus maintenance in the Lynn, Quincy, and Arborway garages.

Regarding the decision to suspend the law in 2015, Mike Vartabedian of IAM Local 264 told reporters, “I think legislators are starting to see that they were lied to,” explaining that Baker has pursued privatization of bus maintenance despite the fact that during the winter of 2015 MBTA buses never suspended their service to riders. He concluded, “We’ve got 150 of our members’ livelihoods on the line … what, for being number one in the nation for performance?” 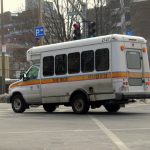 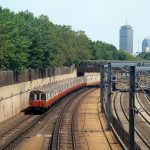