On February 8th the Boston Foundation hosted a panel discussion to unveil a new report entitled, “The Transportation Dividend: Transit Investments and the Massachusetts Economy.” The report, funded in part by the Boston Foundation, examined the impacts of the MBTA on both regional and local economies, concluding that public transit is a critical part of the economy.

The study’s authors calculated that the MBTA system has a benefit of $11.4 billion for the Greater Boston area on an annual basis, which breaks down to approximately $6,700 per household. These benefits include reduced emissions, decreased travel expenses, reduced travel times, and crashes avoided by using public transit. Additionally, the report found that over time the Greater Boston area’s “extensive public transit system” saved the region approximately $15 billion by eliminating additional spending on projects such as public parking lots or new highways.

However, the report’s authors emphasized that if the region wants the MBTA to continue playing an essential role in the economy of the Greater Boston area it will need to invest in repairs and expansions of the exisiting system.

You can read more about the report’s findings here. 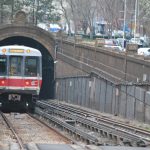