“MBTA UNION WORKERS rallied against privatization efforts Monday morning at a bus maintenance garage in Quincy, where US Rep. Joseph Kennedy spoke in support of the mechanics’ fight against outsourcing the work done at the T’s maintenance garages.

“The men and women that are here today are just asking to negotiate. They’re not asking for much,” Kennedy told workers and their supporters outside the garage. “They’ve put their own proposals for saving on the table and are asking for a chance to engage across a table to see how we can come to an agreement.”

In a shot across the bow of the Baker administration, which has been pushing for privatization savings at the T, he added, “The fact that that outreach has been met with silence speaks volumes about the direction that this administration wants to take these negotiations.”

The rally came in conjunction with the launch of a public outreach campaign by Invest Now, a coalition of T unions, non-profits, and worker advocates to stop privatization of the T’s bus maintenance garages. The coalition posted an ad on its Facebook page on Friday, the first in a series of spots that it plans to release in the coming weeks.” 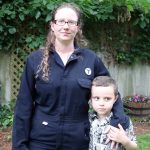 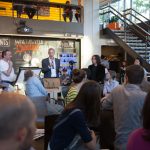