“I voted for Charlie Baker and I’m very disappointed in the fact that now he’s trying to take my job.”

BOSTON, MA – Massachusetts Governor Charlie Baker may be facing his first major political challenge of 2017 from an unexpected source – blue collar mechanics at the Massachusetts Bay Transit Authority (MBTA) who say the Governor is breaking his word not to privatize their jobs.

One such mechanic is Nate Dubois, a Weymouth resident and U.S. Marine Corps veteran, who is featured in the first of several advertisements that the growing Invest Now coalition plans to run in support of Dubois and his fellow core MBTA service workers.

Editor’s Note: Frontline MBTA mechanics including those featured in the video above are available for interview requests.

“I voted for Charlie Baker and I’m very disappointed in the fact that now he’s trying to take my job,” says DuBois, a mechanic at the MBTA Arborway garage who rejects the administrations claims that life will be the same if Baker allows a corporate takeover of the MBTA maintenance garages.

“If you outsource my job to a private company that will inevitably cut wages and benefits, you are attacking my ability to put food on the table for my family,” DuBois explained during an interview that will be part of an ongoing series of ads the coalition plans to air so that the public and voters will hear the voices of the mechanics Baker has targeted with outsourcing threats.

DuBois, age 33, and his wife are expecting their child to be born in August. They are planning to sell their home and pick up additional jobs if the MBTA issues a Request for Proposals (RFP) to private companies regarding the bus maintenance garages.

The MBTA mechanics, who earn less than 3% above the national average when adjusted for cost-of-living, are the #1 bus maintenance workforce in the United States despite maintaining an aging and diverse fleet of busses in adverse New England conditions.

The voter outreach campaign will include a number of public events beginning with a kickoff event on Monday, July 17, 9:00 A.M. at the Quincy MBTA bus maintenance facility, located at 954 Hancock Street, Quincy, MA. Congressman Joseph P. Kennedy III will be on hand meeting with the workers and lending them his support.

“Dumping the MBTA’s financial burden squarely on the shoulders of the hard-working men and women who work around the clock to keep our riders safe isn’t reform,” said Congressman Kennedy. “This is the latest in a campaign of privatization efforts across the state that deal a body blow to working families and put our transportation system at the whim of private profits instead of public interest. I am honored to stand with these mechanics and their families to preserve their jobs, protect our tax dollars, and fight for a state that proudly defends its workers’ livelihood.”

A significant percentage of the MBTA mechanic workforce are military veterans.

In a letter dated June 26, 2017 to Governor Baker, mechanic Dana A. Morrison, age 50, who suffered a traumatic brain injury while serving in Iraq with the Massachusetts National Guard, wrote, “My coworkers have created an environment that has made the transition from war zone, to hospital, to home that much easier… These union members’ hearts match their hard work I see every day and I urge you to please do everything within your power to allow them to keep doing that work to the benefit of the Commonwealth. As a member of the MBTA and as an Iraq veteran, I respectfully request that you instruct the MBTA to negotiate, in good faith, with Local 264 Machinist Union.”

As of July 13, 2017, Morrison has not received any response to his letter from Governor Baker. He has sent the letter three times.

Through negotiations, 406 workers who keep MBTA busses safe and operational as mechanics, fuelers, and technicians within IAM Local 264 have offered ex-MBTA acting general manager Brian Shortsleeve at least $29 million in annual savings – well above the $21 million savings target for bus maintenance set forth by the MBTA Fiscal and Management Control Board. Several other job classifications and unions would also be impacted by any move to outsource work at the MBTA garages.

During collective bargaining sessions between IAM Local 264 and the MBTA, workers have agreed to support all of the workflow and efficiency reforms outlined in the MBTA-commissioned CH2M Hill, Inc. report that are worth between $23-$27 million in expected annual savings. Additionally, the workers have offered significant concessions during negotiations including changes to job classifications that are worth at least another $6-$8 million annually.

Under the workers’ proposal, those annual savings will grow over time as workers will be expected to serve longer in lower job title categories before being eligible for raises or professional advancement, even if they have the necessary skills to advance, generating consistent and exponential savings for management.

Most recently, these core MBTA service workers, some of whom already work two jobs to support their families, voluntarily deferred their scheduled 2.5% percent raise scheduled for July 1, 2017 as an olive branch in negotiations. Additionally, they have offered to accept the same future general wage schedule that the MBTA has already agreed to with the Carmen’s Union. Workers have also proposed the creation of a “labor management efficiency committee” to pursue future savings in coordination with MBTA management beyond the $29 million.

Some watchdog groups say ex-transit chief Brian Shortsleeve, who is still negotiating with the workers on behalf of Baker despite resigning from his post, is intentionally stonewalling to pave the way for a new privatization scheme that would hand over control of MBTA bus maintenance to a private corporation.

“In Massachusetts, you have a small group of blue collar families, just 406 workers, who’ve already offered the Governor millions in savings,” said Donald Cohen, Executive Director of In the Public Interest, a national research and policy center that promotes transparency and accountability for government contracting. “Those are significant sacrifices from a small group of highly skilled workers who will be very difficult for a private corporation to replace if they come in and slash wages even further. The fiscally responsible thing for the Governor to do is to accept those cost savings that are on the table right now – rather than gambling with a privatized transit contract where costs overruns often balloon out of control. Massachusetts has already learned the hard way with contracts like Keolis and others that have hurt taxpayers on the back end of the deal. It would be bad for taxpayers and even worse for riders if the Governor doesn’t take this deal to keep these folks on the job.”

More than 406 mechanics, fuelers, and other skilled professionals united in IAM Local 264 proudly contribute to the operation of the MBTA and to our communities every day. We believe in ensuring safety for our riders and in professionally negotiating contracts that guarantee our members have a say in their job and can perform those jobs in workplaces that are safe. The International Association of Machinists and Aerospace Workers (IAM&AW) and Local 264 have been fighting for workers, their families, and our communities for over 120 years. 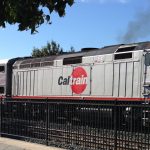 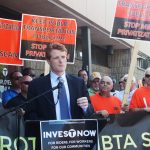